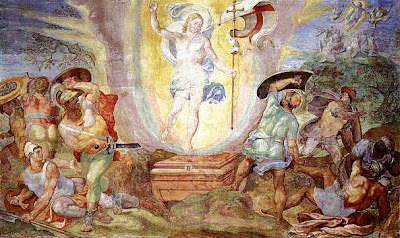 What is Easter? Some say it is the most holy day of the year. Others say it is one of the holy days on the church calendar. Still others say it is a secular holiday commemorating the arrival of Spring. Some Christians refuse to celebrate Easter because they believe it is associated with a Greek goddess of fertility rite celebrated by the Romans and adapted by the church in error. Whatever it is, it is important because it has such a wide influence throughout the world. Is that influence good? Yes, I think it is. On this day, the world is reminded that the Son of God died for the sin of the world, even if the world doesn’t quite get it.

I am struck by the power of Easter — the power of the resurrection itself. The stone was rolled away from the tomb, not so that our Lord could get out — clearly solid walls could no longer contain him — but so his disciples could see in and know that he had risen from the dead. That huge stone had to be rolled away, and there was no man who could do it. But the power of the resurrection of Jesus came from within the tomb. That was the same power that moved over the chaos of the void before creation when God spoke and the worlds were created.

Think about this. At the creation, everything happened because God spoke a word. Did God speak at the resurrection? Did he, like Jesus at the raising of Lazarus, say, “Jesus, come forth?” Jesus is the Word. John tells us that all that was created was created through him, the Word. So think about this: Jesus, the Word, spoke his resurrection into being before he died as he told his disciples that on the third day he would be raised from the dead. He had already spoken the Word of his resurrection before he died on the cross.

This Easter, our nation is faced with some mighty challenges. Our government is spending more than it has. Our leaders seem incapable of figuring out a solution. The price of gasoline is rising. Thousands of people have lost their jobs and homes. The government we have been depending on is running out of answers. People are getting worried about their future. Hope does not burn brightly in their breasts this Easter morning.

5 You will not fear the terror of night,
nor the arrow that flies by day,
6 nor the pestilence that stalks in the darkness,
nor the plague that destroys at midday.
7 A thousand may fall at your side,
ten thousand at your right hand,
but it will not come near you.
8 You will only observe with your eyes
and see the punishment of the wicked.

The power of God is able to deliver us from this mess we find ourselves in. Has man ever made such a mess of things that God could not untangle it? No, and man never will, because man is simply not smart enough, powerful enough, or clever enough.

Starting sometime in the late 19th Century and the early 20th Century, Europeans and Americans began to think they had found a better way of doing things. The old, traditional ways simply would no longer serve the needs of the modern 20th Century world. So, as humankind is wont to do, they decided they could build a better world than the one God built and the one He maintained for their enjoyment. They reasoned among themselves that, in their view, everything was subject to change. Therefore, change must be an immutable law of sorts that they needed to harness for their own purposes. Then they decided that absolute truth, the kind God dispenses, was an obstacle to this new-found change principle, so they would need an alternative. Moral relativism was their solution. This led them to turn everything upside down, calling what had been accepted truth throughout the eons of time to now be passe and of no benefit. They threw out centuries of understanding and reliance on the beneficence of their Creator and replaced it with the beneficence of the State, which, of course, they controlled.

In the words of Stan Laurel “Well, here's another nice mess you've gotten me into!” The problem is we have gotten ourselves in this mess by abandoning the truth for a lie. We have reached a point where now, finally, we are beginning to see that politicians are not to be trusted. If the polls are to be believed, the American people have become very distrustful of government and those who run it. Good! But what are they putting in the place of government as the object of their trust? Certainly not God. Church attendance is down. Religion, especially Christianity, is waning as influence over the morals of the nation.

The answer is right there in front of us. It is Easter! The resurrection power of Jesus Christ to resurrect us from our miserable attempts to become our own gods and rule our own lives. As Jeremiah writes in Jer. 10:23, “O LORD, I know the way of man is not in himself; It is not in man who walks to direct his own steps. “ We need God to direct our path, to show us the way out of the mess we are in. We have no power in ourselves that we should be gods. We are weak compared to the power of the creation, much less the power of the one who created it.

Have you ever stood in the surf and felt the awesome power of the water as it rolls in? Have you ever seen the power of a flood as it washes away everything in its path? Or the fury of a forest fire burning out of control? Or felt the earth tremble and shake during an earthquake? During Holy Week this year of 2012, 14 tornadoes hit the Dallas/Fort Worth Metroplex near where I live with such power that 18-wheeler trailers were seen being tossed 200 feet into the air and slung about like dust.. Our power, even in the machines and inventions of our most capable geniuses, pale into insignificance when compared to the power of nature and of nature’s God. And, yet, mankind still keeps believing he can come up with a better plan. How arrogant!

May this Easter be a breakthrough time for all of us as we ponder and digest the Power of Easter and as we confess “He is Risen” in our life anew this Easter.
Posted by Bill Fisher at 7:41 AM